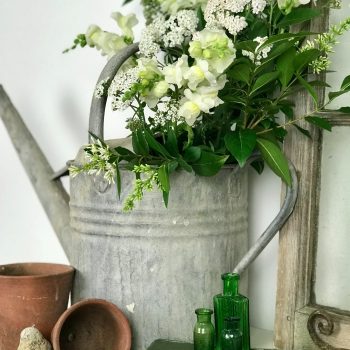 If you are looking for ways to water your houseplants while you are away on vacation, or just looking for a way to streamline watering all your container plants, there are a lot of options to choose from.  There are plenty of products you can purchase, and many DIY methods of watering plants as well.  Whether they are reliable, or will work for your needs may be another matter.

Obviously, you would want to choose a method that is reliable and works for your needs and budget.  Equally important, is selecting a method that provides water to your plants as they need it rather than on a continual basis.  Over-watering a plant is just as bad as under-watering a plant.   You should test what ever method you decide to use, especially if you are going away on vacation.  Without testing in advance, you might possibly come back to dead plants.  It is also good to know how long your chosen method will reliably work.  For example, if you decide to use watering stakes and a plastic soda bottle, will that provide enough water for the entire 2 weeks you are away or only the first few days?

In our situation, we just have too many houseplants.  Watering them all takes a lot of time, so it’s not anyone’s favorite chore.  That means that the plants often get neglected.  And when they do get watered, it’s in huge amounts; enough to hopefully keep them alive until the next watering (whenever that may be).

As a result, we set out to test several different watering methods in hopes of finding what works best for our plants.  Some plants prefer very little water, while others can’t seem to get enough.  The goal was to find out which method would give us consistent results for each plant’s individual preferences.

What Methods Weren’t Tested And Why

There were two other watering methods that were excluded from testing.  Using a soda bottle with fine pinholes burned into the cap, and setting plants into a tub or sink with a few inches of water.  Both of these methods would result in over-watering.  The fine pinholes in the cap of the water bottle continually release water by gravity, versus capillary action based on soil conditions and would be empty within 3 days.  And setting plants in any container of water would result in over saturation of the soil, and eventual root rot.  Neither of these methods would make sense for regular use, so they were excluded from testing. 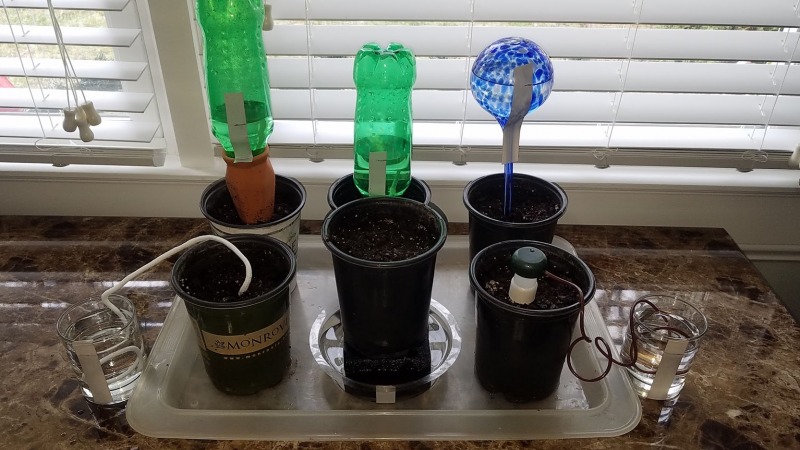 Round One Watering Methods Tested

Before we invested too much money, time and effort into it, it was time to run some comparison tests.  To do this, we selected 6 different watering methods to try out.

In order to be able to measure our results for comparison, we used the same sized pot and water amount for each method.  The first step was to see just how much water was being provided to the soil (without plants) over the course of a week.  All the pots were placed together in a drip tray on a counter top by a window with filtered sunlight.

To run the test, six 4″ pots were filled equal amounts of potting soil.  The soil was drenched and allowed to drain, after which each pot weighed roughly 1 lb 5 ounces.   Each watering method was provided with 1 cup of water.  Because the ceramic watering stakes were primed with water first, we reduced the cup of water by 15 ml (the amount contained inside the stake’s cap and tubing).  Tape was placed on the outside of each water reservoir to mark daily water levels.

Almost immediately, it was obvious that the terracotta water stake, the ceramic watering stake and the watering wick were providing too much water for the 4″ pots; small amounts of water were visible underneath each of the 3 pots.  The soil was completely saturated beforehand, so there should not have been any significant reduction in the water levels of the reservoirs on the first day.  The capillary mat had only a slight reduction in water.  The watering globe and wicking soda bottle had no water level reduction.

By only comparing planter/soil weight and water usage, it was apparent that drip trays should have been used underneath each individual planter.  The Soda bottle wick had not released any water yet increased in overall weight by 2.2 ounces.  This was most likely attributed to the planter absorbing the water runoff from neighboring planters.

With the exception of the Watering Globe, planter weight remained consistent with all the other methods which means soil moisture levels never decreased.  That’s not necessarily a good thing for plants that don’t like their roots to be too wet.  The Watering Globe reduced planter weight by 2.2 ounces without releasing any water; however the soil was still saturated so it may have eventually released water as the soil dried out.  This would probably apply to the Soda bottle as well, had it not absorbed the water runoff from other planters.

After this first round of testing, a few things were apparent.  First, our testing methods were flawed; each method needed its own drip tray.  Next, the Terracotta watering stakes and the ceramic watering stakes were better suited in larger planters.  The Watering wick also delivered too much water; likely due to the size of the wick that was used (3/8″ fiber clothesline). So, on to round two of testing to narrow down results for the methods that would work for smaller planters.

In this round only the Watering globe, Watering wick, Soda bottle wick, and Capillary mat would be tested because they demonstrated in Round One they were better suited for smaller planters.

This time, each method would have its own drip tray to prevent planters from absorbing runoff from other planters.  And a 1/8″ wick would be used for the Watering wick rather than the larger 3/8″ wick, which delivered too much water.  Although the Ceramic watering stake isn’t officially included in this round, we tested it separately to see if raising the planter 3 inches higher than the water reservoir would reduce the amount of water delivered.

The capillary mat and the watering wick were the most efficient, reliable way to consistently keep the soil in 4″ pots adequately watered.

The ceramic watering stakes worked well, but had to be primed a few times to make sure they were working.

The watering globes did not keep the pot sufficiently watered in any of the tests.

The terra cotta stakes and the wicking soda bottle worked the best for pots larger than 4″; however, they provided too much moisture for the 4″ pots.

The capillary mat is definitely the most efficient, reliable method.  Plants can be grouped in a tray using this method, or set up individually in saucers.  The watering wick worked equally well for plants grouped together, but it can get messy if you need to remove the wick in order to move plants around.

Our favorite method for individual plants is a modified method of the ceramic watering stakes.  They would be our least favorite without our modification, because the attached watering line needs to be reprimed if the water reservoir gets too low.  But with our modification, and at a cost of only $1 each, the ceramic watering stakes was a very efficient way to reliable water individual potted plants.

The modification?  Simple: remove the cap and water line and just insert the ceramic stake collar into a small water bottle.  It instantly becomes a minature version of the larger terra cotta watering stakes.

Tips For Watering With Wicks

Keep your reservoir water line level or below the surface of your pot’s soil to reduce the chance of over-watering.

Select a wick that is appropriate for the size pot you are using.  Use thinner wicks for smaller pots and larger wicks for larger pots.

Cover the water reservoir with plastic wrap if you run into issues with evaporation or extremely dry conditions.

If the wick dries up too quickly or comes in contact with other surfaces (soil, concrete, etc) that also draw water from the wick , you can pull it through thin, clear tubing and leave the ends exposed that go in the water reservoir and into the soil. 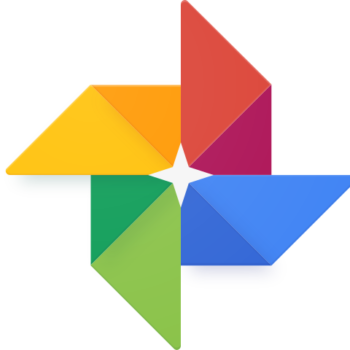 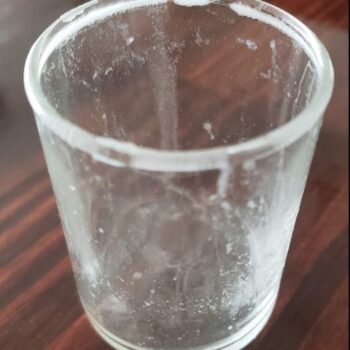 How To Remove Wax Residue From Glass 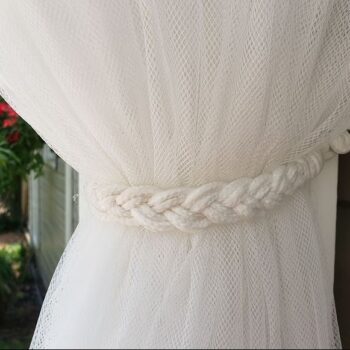 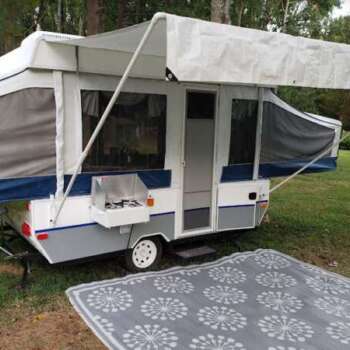