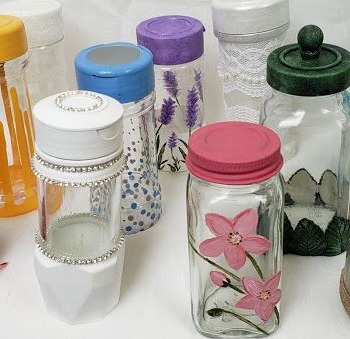 If you are upcycling empty spice jar bottles and looking for a little inspiration, here are a few designs that might help inspire you.  This is a continuation of the Unique And Practical Ways To Re-Purpose Spice Bottles post, and provides a little more detail on the ways various bottles were decorated.

Acrylic paint was used in most of the designs.  If you’ll be using your decorated spice bottles regularly, you should probably give them a light protective spray coat of clear varnish to protect the paint from scratches and moisture.

Here the empty plastic and glass spice jars that we started with: 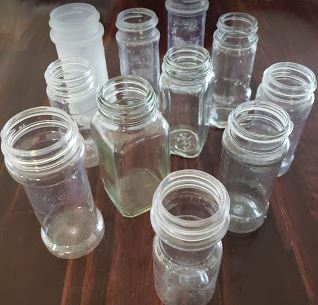 And here are the same spice jars after being decorated: 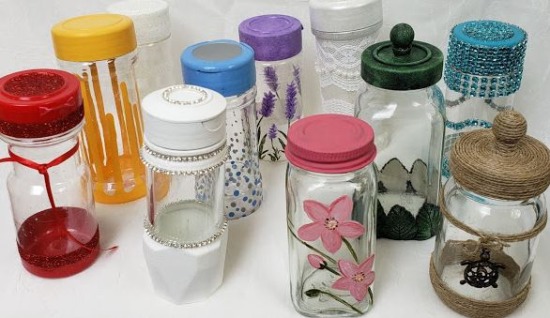 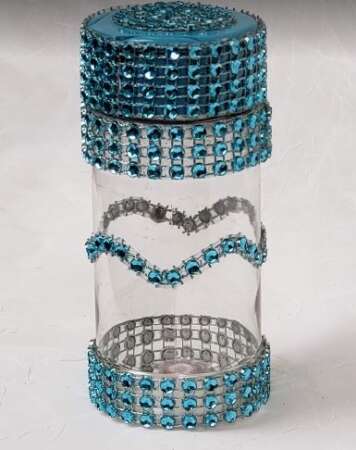 This jar was a really easy design.  The rhinestones are from a local dollar store.  The cap was painted to match the stones, then the adhesive-backed stones were wrapped around the container. 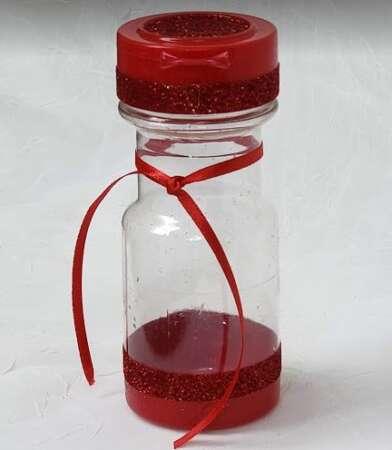 The spice jar already had a red cap, making it easy to go with a red design.  A half inch of red acrylic paint was added to the bottom.  The 1/4 inch double-sided tape (from the dollar store) was added to the bottom of the cap as well as above the painted base.  Red glitter was sprinkled onto the tape, and the neck of the bottle received a thin red ribbon. 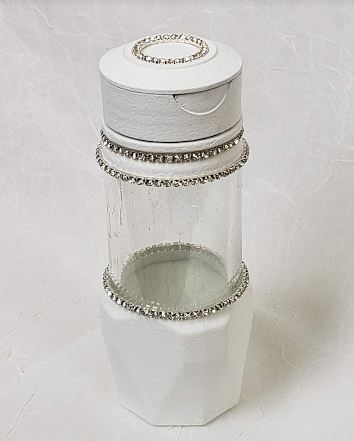 This spice jar if perfect if you want some glam while you’re cooking.  It was painted using a sponge to give it a stone-like texture.  Wouldn’t an identical spice jar painted in black make them the perfect salt and pepper shakers?  Possibly even as a wedding gift? 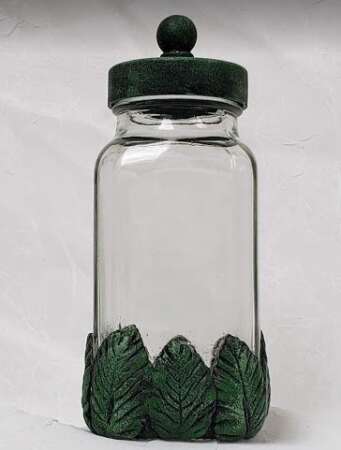 3D leaves surround the base of this glass jar.  The leaves were made from Sculpey dough using fondant cutters and baked directly on the jar before being painted.  The jar cap received a ball finial also made with Sculpey.  The finial was baked separately, then glued to the cap using Aleene’s Tacky Glue.   Using a paint brush, the cap and the leaves were painted solid black.  Then a sponge was used to dabble on a medium green acrylic paint.  Once the green paint had dried, a lighter green was dabbled on for highlight effects. 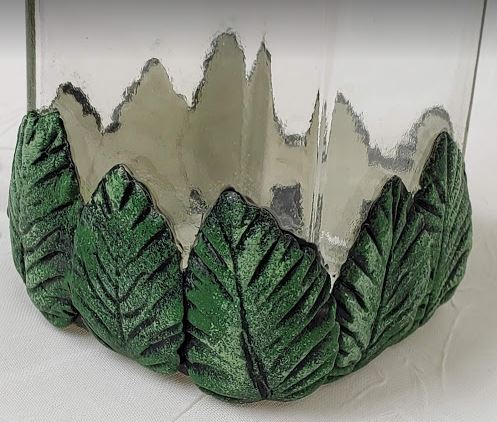 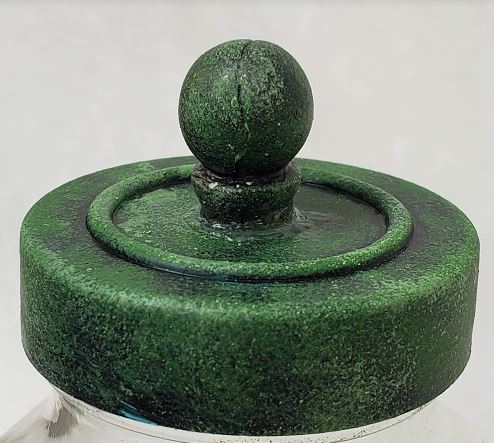 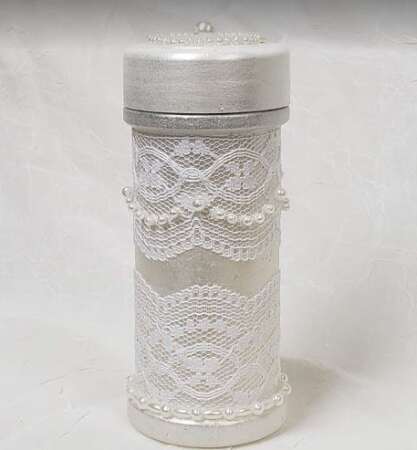 This is one of the spice jars where the sticky label adhesive refused to come off, even after trying our Label Residue Tape Trick.  The entire bottle and the cap were painted with white pearlized acrylic paint.  Lace and pearls were applied to the bottle using Aleene’s Tacky Glue, and the cap was decorated with a circle of small pearls with a large pearl in the center. 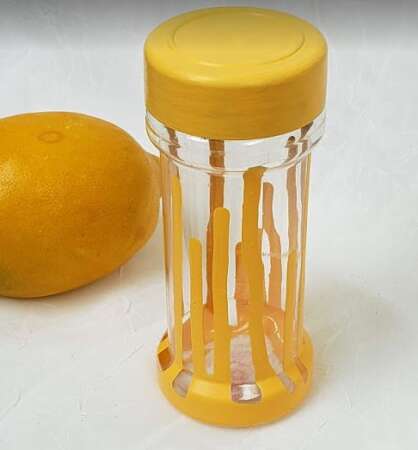 This spice jar received a simple dripping paint treatment and the cap was painted to match.  Getting the yellow acrylic paint to drip over the sides was easy.  But stopping the paint drips from traveling too far or pooling up at the ends required flipping the bottle regularly until the paint set up. 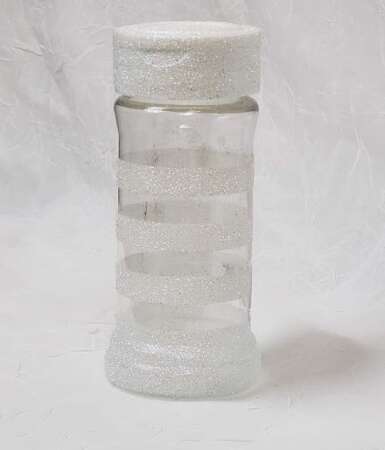 This is another spice jar project where dollar store double-sided tape came in handy.  The base of the spice jar and the cap received a light wash of diluted Aleene’s Tacky Glue before being dusted with ultra fine blue violet glitter.  Then three stripes were added using the double-sided tape, with a final dusting of glitter. 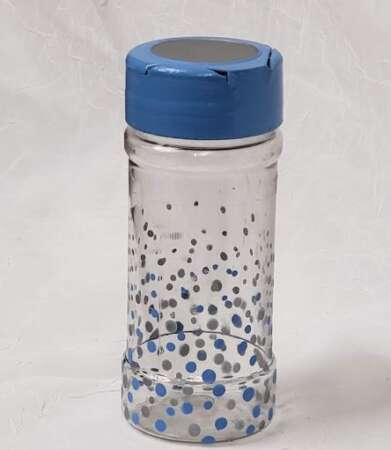 This simple design was made using the narrow ends of paint brushes.   Random dots of blue and gray acrylic paint were added, starting at the base.  The graduated dots were larger at the bottom, then became smaller on the way up. 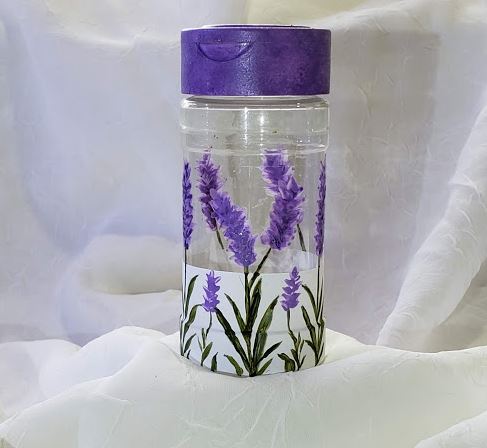 A white 2″ base was painted onto the base of this spice jar to provide some contrast for the flower stems and leaves.  Then lavender flower sprays were added that extended beyond the white border.   The cap was painted using a sponge, and the different colors used in the flowers were dabbled on to give it a mottled appearance. 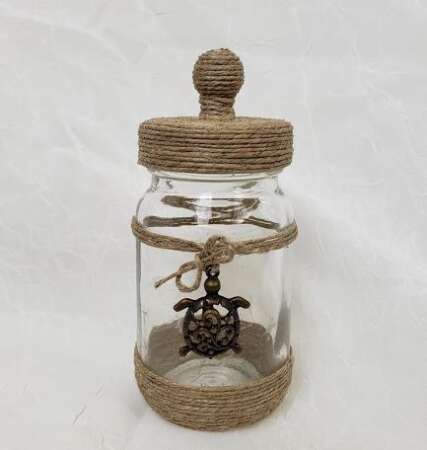 Time and a little patience is all that’s needed to create this jute-wrapped spice jar.  Thin jute from the local dollar store was used.  Regular just might be too thick and look disproportionate. Use some masking tape to mark the 1 inch stopping point on the base of your jute.  That will insure that your jute appears straight; it was lopsided on our first attempt.  Apply a very small amount of Aleene’s Tacky Glue a few inches at a time as you begin to wrap the jute around the jar.  For the cap, a plastic bead was glued onto a smaller bead, and then attached to the cap before wrapping the entire cap with jute.  A thin section of jute was glued near the neck of the spice jar and a small turtle charm was added as decoration.  Note:  use a lighter to burn off all the fine hairs from the jute once everything has dried. 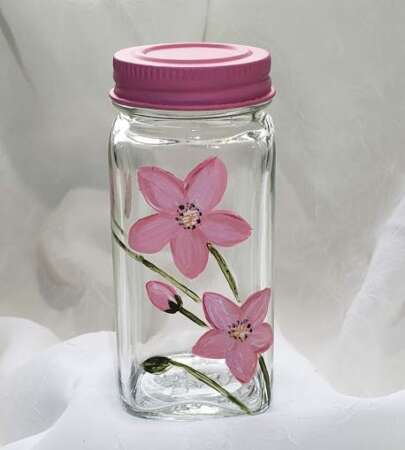 This simple design is a quick way to spruce up a spice jar.  The cap was painted in a corresponding color. 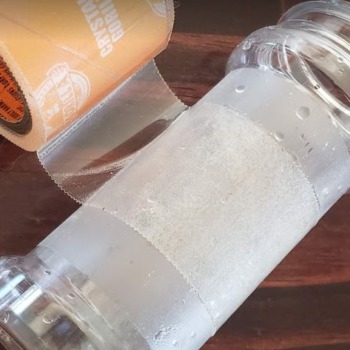 How To Remove Stubborn Sticky Label Residue From Plastic 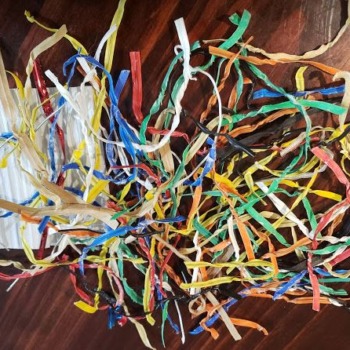